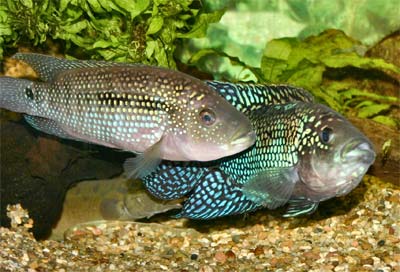 Rainbow trout are native to North America. Over the centuries, their popularity as a game fish, caught for sport and consumption, has seen them being introduced to many other parts of the world, including South African waters in 1897.

It was 70 years later however, that this particular trout caught the attention of the country’s fly-fishermen. Not long after that, trout farms initially cropped up in Mpumalanga and the Eastern and Western Cape.

Colouring of these torpedo shaped fish varies widely. The adult freshwater variety is generally blue-green or olive green, with intense black spotting covering the length of the body.  Adult fish also have a broad pink stripe along the side the from gills to the tail, which is most distinct in breeding males, and the caudal fin is slightly forked and square. Lake or dam dwelling varieties are usually mainly silver in colour with almost no stripe. Young rainbow trout are recognised by their dark vertical bars.

Usually it is in mountain streams that these fish flourish, as the ideal water they require to properly breed and thrive needs to be around 21°C, clear, aerated and flowing.  They are carnivorous and survive on insects, crustaceans and smaller fish.

Breeding season is between June and September.  A female trout clears an area in the gravel by turning on her side and beating her tail up and down.  She will usually produce 2000 to 3000 eggs per kilogram of her weight, while the male moves alongside her and deposits milt (sperm) over the eggs to fertilize them.  The eggs fall into spaces between the gravel and as they land, she digs upstream to cover them.  It takes about 4-7 weeks for them to hatch.  In South Africa, the rainbow trout has a lifespan of approximately five years.

The largest rainbow trout ever recorded was 25.8kgs and was estimated to be around 11 years old.

There is no threat to the population of the rainbow trout, therefore no protection orders on the species, although it is frowned upon for the fish to be caught using any other method than fly-fishing.